It’s interesting that January 1st brings on a frenzy of promises to eat better, exercise more, stop smoking and similar action-oriented resolutions when I always feel like all I want to do is hibernate like a bear. So I was happy to find out when I went to my yoga studio last week that the pose of the month is Savasana.

Savasana (shah-VAHS-anna), also called Corpse Pose, usually is done at the end of every yoga practice, and it looks deceptively easy. After all, what could be that hard about lying flat on one’s back with arms and legs stretched out away from the body, and closing the eyes for 10 minutes or so? But I say “deceptive” because Savasana can be the most difficult yoga pose of all — first, because it’s hard for many of us to truly relax, and second because Savasana is about relaxing “with attention”. Yoga Journal says that in Savasana we attempt to “quiet the physical body and pacify the sense organs”, so we need to pay particular attention to relaxing the eyes, ears, nose, and mouth. It asks us to surrender to the point where the boundaries of the body begin to dissolve, where we can symbolically “die” to old ways of thinking and doing. 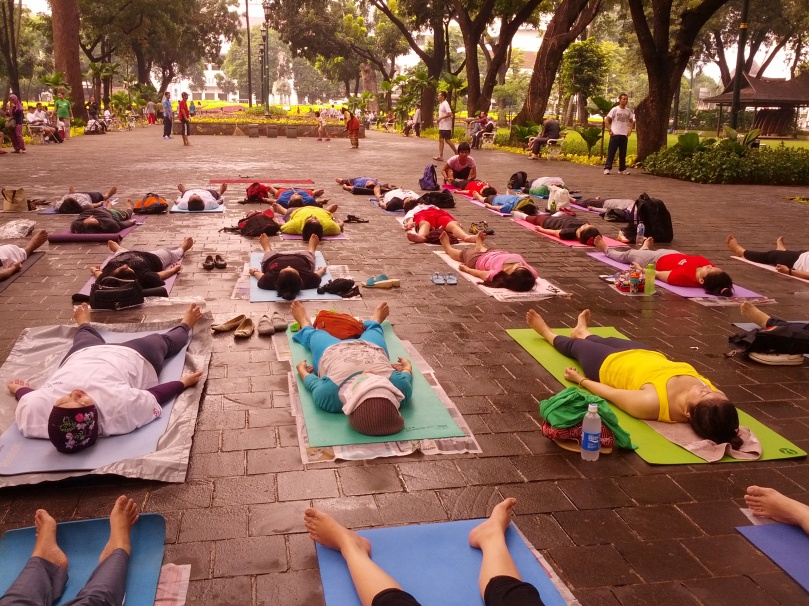 Savasana is the bridge that allows you to take the benefits of class into your everyday life. This is why yoga teachers tell people who have to leave class early that they should plan to stop the regular practice with enough time left to take a few minutes in the pose before going. As Jon Kabat Zinn says, “Not forcing anything, we just do our best to line up with the warp and woof of body and mind, floor, and world, staying in touch.” Savasana brings together all the disparate pieces of the yoga class and gives you time for processing them and absorbing their benefits.

Sleep, which we tend to crave during the cold winter months, is like Savasana in that it is important for integrating the separate pieces of our days. We can be more effective the next day if we’ve spent time in sleep, regrouping and consolidating everything that we learned and experienced during the day. In addition, sleep sometimes helps us problem-solve because the useless information that came in during the day is forgotten, and only the crux remains. While there is still much to learn about the purposes of sleep, some researchers theorize that it helps the brain be “plastic”, to dial down synaptic activity for a while and use less energy. We are literally resting the brain, perhaps more so than resting the body.

Animals hibernate in the winter as a way of saving energy too, because food resources are scarce. Most of us don’t have that problem, but there’s still a case to be made for looking at January as a month of repose. It’s the coldest month of the year in the northern hemisphere and has some of the shortest days, so why not sleep a little more and yes, get down on the mat in Savasana? Use the darkness to gather energy, reflect on where you’re going and prepare for the longer days ahead. The word “January” comes from the Latin word meaning “door”. Consider opening the door to the new year slowly rather than abruptly. Take the time to first figure out what’s on the other side.

Indira Gandhi said that, “You must learn to be still in the midst of activity and to be vibrantly alive in repose.” That’s not only the challenge of Savasana, but also the way we manifest it in our everyday lives.