Sounds I hear while meditating:

The hum of something – traffic? A lawnmower?

Yipping of a small dog

There’s something incredibly comforting about the sounds I hear on an average day in my neighborhood: the insects, the birds, construction on a neighbor’s house, the sound of children playing. Like a baby who becomes accustomed to its mother’s voice while in her womb, these are the sounds that tell me everything is “normal”, life goes on. 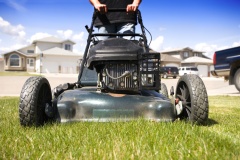 But when I sit down to meditate, these sounds can also serve as a focal point. Following the breath in mindfulness meditation is very popular, but sometimes I find it difficult to stay focused on the breath. So what I like to do is to just sit and experience the sounds in my environment, especially in the spring and summer. If the windows are open, I can hear a lot of sounds from outdoors, both natural and manmade. Today, with the windows closed and the air conditioning on, most of the sounds were distant and muffled. My house was silent; I couldn’t hear appliances, air conditioning or computers from where I was sitting. So I became very aware of what was happening outside.

Most of the time, we don’t focus on the sounds around us, unless they are exceptionally pleasant or irritating. Sound just becomes a background for whatever we are thinking or doing at the moment. But when I stop and listen to each sound separately, it’s easier to find the quiet spaces between them. Deepak Chopra has said that, “Meditation is not a way of making your mind quiet. It’s a way of entering into the quiet that’s already there.” Although it seems counterintuitive, paying attention to sound helps me find silence. 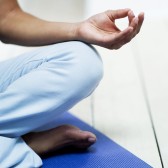 While there aren’t many rules for meditating, having a passive attitude (nonjudging) is recommended. One way to achieve this is by becoming the observer rather than the thinker: I am not my thoughts, so I can note them and watch them pass with a sense of detachment. Observing the sounds around me helps with this, because they seem so remote and apart from me. The sound of the chain saw is no worse or better than the sound of the cicada; they both merely exist.

Heightening my awareness of sound, and observing it passively, can lead, I hope, to becoming a less judgmental observer of myself and others. Can I apply that kind of awareness to my own emotions and attitudes, learning to see and identify them before I act on them? The Dalai Lama says that “It is really a matter of habit…the more habituated you are to this awareness of the rising of emotion, the awareness in itself creates a separation between you and the emotion…”

So I listen to the sounds of my neighborhood, and hope to create a habit.