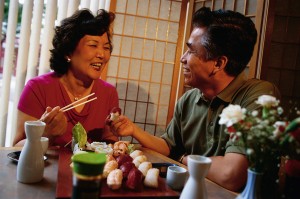 That’s the message behind the Slow Food movement’s Food and Taste Education program. Do we really need to be educated about something that seems so obvious? Apparently so.

Yesterday in the Washington Post, J. Freedom du Lac wrote about a trend seen in both casual restaurants and more high-end dining spots: people who eat a meal alone, but never put down their smart phones. Some restaurateurs don’t like it because they think their food should be the focus of the dining experience, but most are resigned to it. Even those restaurants that have a ban on devices realize that they can’t enforce it.

In the past, solo diners would often take a book or a newspaper with them to a restaurant to avoid the social awkwardness of eating alone. Is the iPhone or iPad any different? Does it represent a need for constant stimulation, and an inability to be alone with our thoughts; or does it mean that we crave contact with other people, even at a distance?

I’m wondering if restaurants that have incorporated communal tables might have found the answer. The concept emerged first in New York City and on the West Coast, but now most cities have at least one or two restaurants where patrons can dine together.  Some people have been slow to embrace it, and some will never like it, but my experience is that it does have the potential to generate conversation and the conviviality that the Slow Food movement teaches. 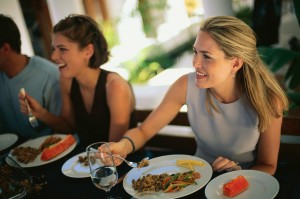 On-line comments indicate that the communal table might be a boon to the solo diner in avoiding the crutch of the iPhone. The web site solodining.com even posts a list of restaurants that have communal tables.

What about the pleasure of eating?  Dining alone may actually give us an opportunity to savor our food and experience it more fully than when we are with others; but because we feel uncomfortable eating alone in public, we tend to rush through it. If we can resist that urge, and incorporate principles of mindfulness to the act of eating, we could be rewarded with a deeper, more satisfying sensory experience.

Jan Chazen Bays has written what many consider to be the definitive book on mindful eating. When she discusses people’s issues surrounding food, she says that “The problem is not in the food…The problem lies in the mind. It lies in our lack of awareness of the messages coming in from our body”. One of the principles of eating mindfully, according to the Center for Mindful Eating, is “Choosing to eat food that is both pleasing to you and nourishing to your body by using all your senses to explore, savor and taste.”

So, the next time you find yourself eating alone, whether at home or in a restaurant, try making your meal more of a sensory experience. 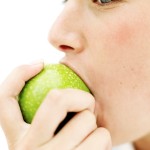 Take a moment to breathe. Think about where the food came from, and your connection to the land where it grew, the person who produced it, the path it took to get to you, the people who prepared it and served it to you. Thich Nhat Hanh writes, “We can see and taste the whole universe in a piece of bread! Contemplating our food for a few seconds before eating, and eating in mindfulness, can bring us much happiness.”

2 thoughts on “How we eat alone”