I watched a video on YouTube yesterday called “A Wild Year”. It depicts the activity at just one spot in Banff National Park in a time lapse taken over a 12-month period. The video reveals all the different seasons and the various creatures that crossed the path in that spot, including people, bears, deer, moose, goats, and what looks like a mountain lion. What’s fascinating to me is that each species is at the spot at a different time, and it makes me wonder how much awareness each had of the others. 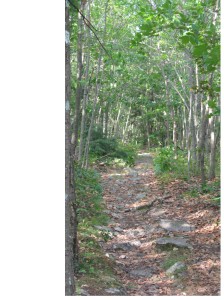 We all know that animals use more of their senses than people do. Humans rely overwhelmingly on vision most of the time, and hearing second. Would paying more attention and cultivating our other senses allow us to become aware of others in a way that we usually miss? Watching the Banff video raises the question of how we fit into the bigger world. How does what we do affect others? Who can tell that we were here?

The question applies to environmental issues, bringing to mind the American Indian ethos of “tread lightly on the earth” and the Boy Scouts’ philosophy of “leave the world a little better than you found it. “  We can broaden the concept, though. Bringing mindfulness to all of the micro-interactions we personally have every day might change the stamp that we leave on the world.

There is a mindfulness practice I sometimes assign my students, called “Letting Go”. It was created by Gregg Krech of the ToDo Institute.  It involves paying close attention for one full day to how you let go of things: a doorknob, a pen, a dish, someone’s hand. Are you letting go with a sense of intention, or in a careless way? Can you be more deliberate about how you let go, noticing the movement and how it feels? Does the texture, shape or weight of an object determine how you let go of it? At the end of the day, what were the consequences of paying attention to the act of letting go? How did things change?

Most of my students who have tried this practice say that it heightened their awareness of their actions, and of the physical world around them. They became more conscious of their sense of touch. Slowing down their actions also helped calm them, by avoiding unnecessary abruptness and noise.

If we bring more sensory awareness to our everyday acts, maybe our presence can leave things, people and places just a little bit better than how we found them.