Nothing gave me so much contentment in childhood as curling up somewhere with a good book and losing myself for a while. And if one good book was a pleasure, then summer reading – book after book after book – was a feast.

In that spirit, I made a list of the best books I’ve read this past year – a feast of summer reading for you:

(In no particular order)

All the Light We Cannot See by Anthony Doerr – Will we ever run out of stories to tell about World War II? The sheer number of books and films in this genre speaks to the importance of telling a story from multiple perspectives, whether in fiction or real life. Doerr’s novel is a great addition to the shelf. Beginning in the 1930s and continuing to the present day, it tells the story, in parallel narratives, of a French girl and a German boy. Both of them damaged in some way, and struggling to survive the war, they touch, and even save, each other’s lives in improbable ways, over space and time. It is only rarely a happy read, but is amazingly touching, poignant and captivating.

The Good Lord Bird by James McBride – This piece of historical fiction by the author of The Color of Water is a new twist on the tale of abolitionist John Brown and his ill-fated raid on Harper’s Ferry. The fictional “Onion”, a boy Brown plucked from slavery, narrates the story many years later. Onion is at first a reluctant traveling companion to the God-fearing, Bible-preaching Brown, but he comes to love him, and his observations of the foolhardy, yet brave, abolitionist are sharp, yet funny and warm. It took me a while to get absorbed in this book, but I was glad I stuck with it. 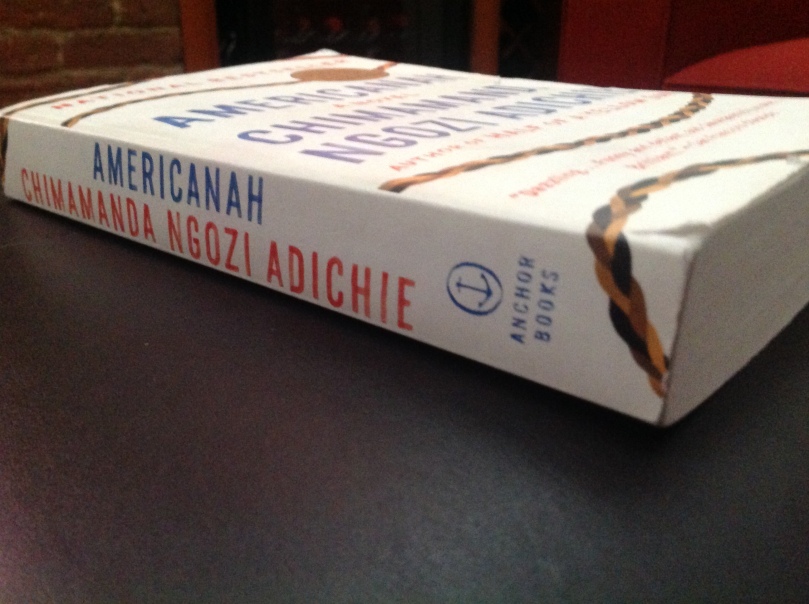 Americanah by Chimamanda Ngozi Adichie — This best-selling novel is both a love story and an immigrant story. Nigerians Ifemulu and Obinze are soulmates, but after Ifemulu leaves for school in America, they are separated for years. Not able to join her, Obinze goes to England on a visitor’s visa and stays after it expires. Both of them struggle to adapt to the new cultures in which they find themselves; perhaps the best part of this book are Ifemulu’s observations on Americans and American life, as seen by an outsider. [The author also has an interesting TED talk about the danger of telling a story from only a single perspective.]

Close Your Eyes, Hold Hands by Chris Bohjalian – Bohjalian is the only male writer I know who can write believably in a woman’s voice. This time he does it from the perspective of a teenage girl, one who becomes a runaway after a devastating nuclear accident in which both her parents are implicated. We feel her struggles with whom to trust, what choices to make and how to come to terms with all she has lost. Bohjalian is not a “feel-good” writer – there is always loss in his novels – but he tells a compelling story.

Behind the Beautiful Forevers: Life, Death and Hope in a Mumbai Undercity by Katherine Boo – This is the non-fiction entry on my list, but it reads like a novel.  Boo takes us into life in a Mumbai slum situated right beside the international airport. Juxtaposing the clean and glittery approach to Mumbai that visitors see, with the grim and gritty life of those scratching out a living at its edge in Annawadi, she tells the stories of Abdul, Asha and other residents trying to get ahead, or at least get by. Winner of the National Book Award, this is a story told with great humanity even as it deals with seemingly hopeless situations.

The poet Kyle Dargan has said that, “..being a poet means I notice stuff for a living. To write is to first see or hear some element of the world and then attempt to render it with language.” The books on my list do indeed have poetry in them, and their writers are masters of noticing, rendering and presenting us with the gift of story.